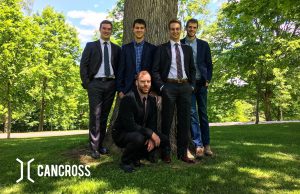 A group of recent University of New Brunswick graduates is developing a solution to the New Brunswick forest industry’s issue with crossing culverts and waterways in the woods.

CanCross, a Fredericton based infrastructure start up consisting of five graduates of UNB’s engineering program, is in the final stages of patenting their Rapid Modular Spanning System design.

The process began when the group teamed up for a project as part of the Technology Management and Entrepreneurship program at UNB.

CanCross’ goal was to design a portable and versatile bridge that could be used for forestry, road washouts, disaster relief and construction. Similar to the Bailey bridge, originally developed during the Second World War enabling allied troops to cross waterways on the battlefield, CanCross’ product comes in pre-built units that are connected at the job site.

“I kind of try to describe it as Lego pieces that go side-by-side and span a single or double lane,” Cameron Arsenault said.

An excavator is the only piece of large-scale equipment that’s required to install CanCross’ bridge – a major advantage over other models like the Bailey bridge.

Having pre-built modules saves time and money during the installation process. “The big thing for us is trying to install as quick as possible,” Arsenault said. “To do that we try to get as much of it as we can in one piece.”

CanCross’ portable Rapid Modular Spanning System reduces environmental impact than other traditional models that may be difficult to remove.

The idea came from a discussion between the group and a contractor earlier in the year. “We took his idea on as a project because he’s not an engineer so he couldn’t stamp the bridge,” Casey Glenen said. “He designed one but it wasn’t up to code, so we took it from an engineer’s stand point and redesigned it.”

Tracy MacDonald, a professional engineer, mentored the group in the project’s early development stages, offering guidance and helping them set up meetings with potential stakeholders.

Stream crossings were the initial market for the team’s design, so they consulted the Department of Transportation and Infrastructure (DTI). This meeting opened the door to other applications for their product as well. The department suggested the bridge could be placed over weight-restricted culverts, enabling more efficient harvesting by the forest industry.

“Forestry companies could increase their loads up to maximum capacity, saving them a lot of money in shipping costs and saving the environment because it takes more trucks off the road,” Scott Allen said.

Arsenault believes timing was everything in the early stages of turning CanCross’ vision into a reality.

“It’s one of those situations where necessity is the mother of innovation,” he said. “For going over streams, I was debating whether or not that was a good opportunity. But when this presented itself, it showed there was a big issue [with weight-restricted culverts].”

As CanCross puts the final touches on their bridge’s design and ties up logistical loose ends around patenting, the group is now exploring manufacturing options.

With the closure of the Picadilly mine near Sussex this past January – leaving 430 people jobless – the group believes they can create employment opportunities in the region. They’re also looking to create manufacturing jobs in other regions of Atlantic Canada where industry has declined.

It’s an exciting time for the CanCross crew, but it hasn’t exactly been a stress-free process reaching this point.

“It’s been scary because most of us have turned down jobs and we see our friends out working at different companies, we’re taking this big risk,” Allen said. “But we’re having so much fun with it and we’re actually seeing results come from it. It’s better than working for a company in my opinion.”

In the next few weeks the team is aiming to finish the design and ensure the geotechnical aspects of their product are sound.

For now, they say building connections is the name of the game. “This past month has been business oriented,” Glenen said. “We’ve had a lot of meetings with people I never thought I’d talk to in my life.”